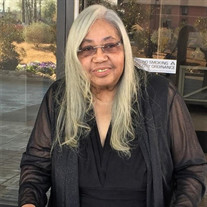 Proverbs 31:25-26 She is clothed with strength and dignity; she can laugh at the days to come. She speaks with wisdom, and faithful instruction is on her tongue. Betty Jean Waites was born June 12th, 1945 in Los Angeles, CA to the parentage... View Obituary & Service Information

The family of BETTY JEAN WAITES created this Life Tributes page to make it easy to share your memories.

Send flowers to the WAITES family.