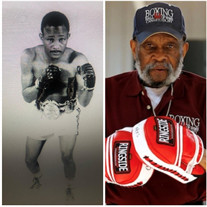 Thessalonians 4:13 “But I would not have you to be ignorant, brethren, concerning them which are asleep, that ye sorrow not, even as others which have no hope.” Curtis (Bevo) Cokes died May 29, 2020, at the age of 82, in Dallas, TX. Curtis was born on June 15, 1937, in Corsicana, TX, to Nathaniel Cokes, Sr., and Emma Cokes. Curtis had various careers in life, but his most fulfilling one was realized on November 28, 1966, when he won the WBA/WBC World Welterweight Title. Curtis was famous for his training regime, which he instilled in the boxers he trained at his gym “The Home of Champions.” Curtis was inducted into the International Boxing Hall of Fame in 2003, Texas Black Sports Hall of Fame 2001, and the Texas Sports Hall of Fame in 1984. Curtis also made one film appearance in 1972, in the John Huston film, Fat City, alongside future Academy Award winner, Jeff Bridges, and Stacy Keach. Curtis is survived by: his two sons, Curtis Cokes, Jr., and Vincent H. Cokes; his four daughters: Sharla (Cokes) Emerson, Vashiti Cokes, Tammi (Cokes) Anderson, and Stephanie (Cokes) Jackson; sister, Mary Helen (Cokes) Thomas; brothers, Joe Cokes and Robert Cokes; along with a host of great-great-grandchildren, great-grandchildren, grandchildren, nieces, nephews, and many friends and associates. Curtis was genuinely loved by all. He was preceded in death by his parents; and four brothers, Nathaniel Cokes, Jr., Charles Edward Cokes, Jake Donald Cokes, and Earnest M. Cokes.

The family of Boxer CURTIS COKES created this Life Tributes page to make it easy to share your memories.

Send flowers to the COKES family.