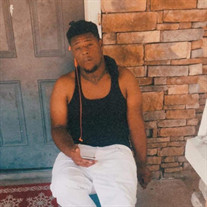 Jabari Griffin was born on April 9, 2000, to Jennifer Griffin and Tommy Martin. He was preceded in death by his sister, Tomarian Martin, and his grandfather, Bruce Hemphill. He leaves to cherish his memory: his mother, Jennifer Griffin; father, Tommy... View Obituary & Service Information

The family of JABARI GRIFFIN created this Life Tributes page to make it easy to share your memories.

Send flowers to the GRIFFIN family.