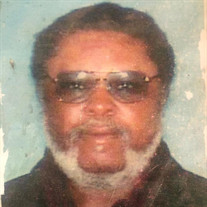 Rufus Chatman’s work here is complete as he was called to glory on Wednesday, December 9, 2020 after a long health battle. His strong will to live; unwavering faith in God, and love and prayers of family and friends carried him through these trying years. Rufus Chatman aka RC was born on January 20, 1952, in Floydada, Texas to the parentage of Velma and Wade Chatman who both preceded him in death. RC moved to Dallas, Texas in the late 1960’s to start new adventures and experiences in big city life. RC accepted Christ as his Lord and Savior over a decade ago. If you asked a hundred people who RC was, everyone will give you a different story. Many would say he was an “army sergeant, a great father, a movie star, a king, a cowboy, a ladies man, or a brave man.” Rc was most of those or maybe he was all of them. What we do know for sure, is that RC was a storyteller. No matter the occasion, he had an awesome story to tell. He entertained us, gave life lessons, and informed us of who he was, and where he came from. RC was a cowboy; he loved his cowboy movies, and the Dallas Cowboys. He was naturally funny even when he was serious, and always had the biggest smile. He was preceded in death by his mother Velma Westbrook-Chatman, father Wade Chatman, one brother; Louis Paul Chatman, four sisters; Mattie Mae Chatman-Chambers, Wadie Mae Chatman-Bradshaw, Rosie Lee Chatman-Sims, Ruby Lee Chatman; and nephew Alcedis Bradshaw. He leaves to cherish his memory and great stories: three sons, Derrick (Malaine) Young, Bryant Henderson, Charles Henderson; five daughters, Melinda Young, Melissa Young, Lukeitha Henderson, Tammy (Rodney) Walker, Tandy (Larry) Reynolds; one sister Esther Lee Chatman- WSilliams, twenty grandchildren, five great grandchildren, and a host of cousins, nieces, nephews, and friends. RC can now tell new and old stories to all family and friends that gone before him. He will always be in our hearts and his stories will forever make us smile! Until we see you again!

Rufus Chatman&#8217;s work here is complete as he was called to glory on Wednesday, December 9, 2020 after a long health battle. His strong will to live; unwavering faith in God, and love and prayers of family and friends carried him through... View Obituary & Service Information

The family of RUFUS CHATMAN created this Life Tributes page to make it easy to share your memories.

Rufus Chatman’s work here is complete as he was called to glory...

Send flowers to the CHATMAN family.