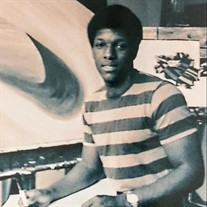 Timothy Odell Hicks was born on Saturday, August 18, 1945 in Mecklenburg County, North Carolina to the parentage of Cora Belle Kennedy & Willie Johnson. Tim was educated in the Greensboro, NC public school system. He graduated from James Dudley High School in 1963. Where he was on the swimming team and was an Exceptional Artist. Tim was a musical prodigy at 9 years old, he could play the piano by ear. At 12 years old he had taught himself how to play the acoustic guitar and by 15 the Lead Electrical Guitar. By 17 he could play the bass guitar and the drums. After graduating from Dudley High School, Tim enrolled in North Carolina A&T College (now State University) in 1963 majoring in Art & Education. However, his musical talents were discovered by Jamo Thomas leader of a popular house Band and in the 2nd semester of his junior year he went on the road with the legendary Jamo Thomas & The Party Brothers. Tim subsequently went on the road and played guitar for many popular artists including Gladys Knight & The Pips, Aretha Franklin, Jackie Wilson, Bobby “Blue” Bland, Gene Chandler, Judy Clay, Johnnie Taylor, Curtis Mayfield, Bonnie Lee and in 1967-1968 joined a 24-piece orchestra at the Apollo. Tim married the lovely Vicki L. Nelson on August 27, 1969 and to this marriage one little lady was born Meredith Michelle in 1971. While continuing to play gigs in bands and earning his education, Tim completed his Bachelor’s Degree in 1974 and his Masters in Art Education in 1976 from North Carolina A&T College. Afterward he immediately began his successful tenure at Paine College in Augusta, Georgia. Always aiming for the highest qualifications, Tim began working on his doctorate in Art Education at the Pennsylvania State University in State College, PA in 1987 while simultaneously teaching Art classes at the University as well beginning in 1985. Dr. Timothy O. Hicks dissertation was completed in 1992 and is titled “Psychical Distance And Related Aesthetics Concepts As A Factor In The Appreciation Of Art.” Along with Paine College, NCATSU and Penn State, Dr. Hicks also instructed at Delaware State University in Dover, DE and Lenoir-Rhyne University in Hickory, NC from which he retired from collegiate teaching in 2013. Prior to and continuing into retirement, Dr. Hicks expanded his hobby of Photography as a business, photographing people, places and things all over the USA & Caribbean. Tim also proudly worked with his daughter Meredith Michelle and on her numerous tour dates, annual festivals and Gemstone events. He could often be seen snapping countless photographs, asking questions and joking around in Atlanta, Charlotte, Philadelphia and Miami venues. Tim created spectacular artwork for Meredith’s brands and he never stopped playing his guitar. Although Dr. Hicks always worked out, was physically fit and watched his diet, hereditarily he acquired hypertension and diabetes related issues which took a massive toll on his ego, lifestyle and quality of life. In December 2019, at the age of 74, he suffered a subdural hematoma, the result of a truck wreck and a downward spiral began. Although Dr. Hicks was no longer fully independent, he was always strong and full of life! Tim is of legend at Greenhaven Rehab Center in Greensboro, NC (Feb 2020 - Mar 2021) whereas during the facility lunch time he would play the piano and lead gospel songs for all the residents while a minister would sing. Staff member Melisa said that Dr. Hicks kept the cafeteria area “rocking!” Reluctantly, Tim was transferred to Maple Grove Nursing Home in March, and then in May on to Brian Center in Eden, NC. Unfortunately, Brian Center was Tim’s last stop. Dr. Timothy Odell Hicks is preceded in death by his dearest Mattie Belle Kennedy (Big Momma) of Greensboro, NC in 1987, his darling Mother Cora Belle Fox (Kennedy) of Greensboro, NC in 2007, his sister Mattie Frances “Sugar Baby” Fox (Clarence Norman) of Alexandria, VA in 2015, brother Robert Nelson Fox Jr (Janet) of Chicago, IL in 2020. He is survived by his wife Vicki L. Hicks (Nelson) of Dallas, TX, daughter Meredith Michelle Hicks (Capleton) of Dallas, TX, sister Frances Janet Dick of Washington, DC, Freddie Davis and Mary Davis of Greensboro, NC, special nephew Paul J. Fox (Tarra) of Menifee, CA, past son-in-law Uton C. Capleton of Dallas, TX, two young grandsons Cannon C. Capleton & Chance C. Capleton of Mansfield, TX and a nice host of nieces, nephews and cousins are wise to maintain Dr. Hicks great legacy!

The family of DR. TIMOTHY O. HICKS created this Life Tributes page to make it easy to share your memories.

Timothy Odell Hicks was born on Saturday, August 18, 1945 in
Mecklenburg...

Send flowers to the HICKS family.